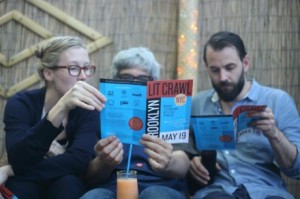 Hold on to your tights! The Lost & Found Show has been invited to bring back its naughty “Underwear” edition to the Brooklyn Lit Crawl this Saturday, May 18th, featuring confessions from the lives of authors, bloggers, and burlesque stars.

With tales of striptease mishaps, jungle juice shenanigans, the wonders of spanx, and finding the perfect bra, this show truly has your ass covered.

About the Lost & Found Show

Every third Thursday of the month, writer Daniel Guzman brings together authors, bloggers, comedians, and performers to Happy Ending (302 Broome Street, Lower East Side) to share fiction and nonfiction tales involving everyday objects and the secrets they reveal about us. From the sublime to the surprising, each show is as diverse and tempting as the contents of a lost and found box.

Lit Crawl NYC draws hundreds of readers, writers, and revelers to its yearly Lit Crawls, a mixture of literary events and pub crawls in the East Village (Autumn) and Brooklyn (Spring), to listen to writers, play trivia, and celebrate New York’s spirited and diverse literary community.
Events are held at local mainstays like the Bowery Poetry Club, Gallery Bar, KGB, BookCourt, and A Public Space. Regular literary participants include the Paris Review, BOMB Magazine, and Granta.

For the complete May 18th Brooklyn Lit Crawl schedule of events, visit http://litcrawl.org/nyc/schedule/

Poet-cum-burlesque babe Ember Flame combines witty words and silky rhythms into her distinctive performances. Part commentary, part confession, Ember’s modern ballads offer hope for transformation with lots of hot, heart-powered seduction. Ember’s eclectic, ever-expanding cast of characters include a futuristic iBabe, a blood-spattered Dr Death, a whistle-blowing fairytale princess and an office worker who longs to feel her jungle rhythms. Whoever she’s embodying, Ember strips to the soul, uncovering something about society along the way.

Kiley Edgley is a blogger, essayist, and former professional quiz writer. She was a regular contributor to Brokeassstuart.com and her work appeared in the book “Young Broke and Beautiful.” After growing up in the lush, green Pacific Northwest, she found herself craving concrete and asphalt and is now happily living in Brooklyn. Currently, she’s a co-producer of the Lost & Found Show. She writes about cultural observations, weird things that happen to her, and nonsense in general. Read them at her blog.

Suzanne is the managing editor of offMetro SF, listings editor of EuroCheapo.com, and founder and director of Lit Crawl NYC. She has written for National Geographic, Marie Claire, and the upcoming Matador Travel book 101 Places to Get F*cked Up Before You Die ( 2014), among others. She hails from San Francisco, lives in Brooklyn, and is as obsessed with both cities as she is with ghost stories, palimpsests, and historical re-enactors.

Emily Rubin’s fiction has been published in Conjunctions, The Red Rock Review and HAPPY. She was the first recipient of the Sarah Verdone Writers Award, a finalist in the International Book Awards 2011 and was nominated for a Pushcart Prize. In 2005 she founded Dirty Laundry: Loads of Prose, a reading series that takes place in working laundromats throughout NYC and around the country. Emily teaches creative writing workshops at Beth Israel Medical Center. While on a trip to Russia researching her debut novel, STALINA, published in 2011, she became acquainted with the country’s obsession for lingerie, which inspired one of the story lines in the book. She is at work on another novel. Emily lives in NYC with her husband, Leslie and their dog, Sebastian.